Now, about a one month after the three-week Ultima Thule skiing expedition to Svalbard I have finally scraped together a trip report!

As I wrote live updates from the ice during the expedition I didn’t feel that a traditional trip report would be necessary. I will still post a bunch of posts related to the expedition when I find the time but there will be no traditional chronological trip report. Instead you can read the six updates I wrote during the trip. You can find the updates from my blog or by clicking the links below

But the new thing is a trip report in the form of pictures! I took a big bunch of pictures during the expedition. I don’t know how many pictures I actually took but after deleting failed ones and duplicates I ended up with 1330 pictures. After some hard time with selecting pictures to be published I ended up with 256 pictures, which was clearly too much. Then after some more time I ended up with 173 pictures. It is still a bit too much but I didn’t feel that a smaller amount would have made justice for the great trip. To give some more content for the pictures I wrote short captions for each. The slide show viewer of the gallery doesn’t show captions so I recommend manual clicking instead.

So, grab of cup of coffee and try to forget the summer and enjoy the three weeks skiing on the high arctic of Svalbard. When you are mentally prepared, click yourself to the gallery.

Later on I will make a very selected edition of the pictures with only some of the technically and aesthetically most pleasing ones but there will not be too many if any new ones in that set.

Please, feel free to leave comments to the blog or straight in the gallery.

I promised some pictures from the Ultima Thule 2011 expedition by the end of this week. Unfortunately I had some other things to do so I’m not quite finished with all the post processing but I made a randomly picked teaser set for you to take a look at. The pictures are uploaded into my kuvat.fi gallery and you can get there by clicking the picture below!

As I mentioned previously, in addition to our twelve man expedition, there was another Finnish expedition in Svalbard at the same time with us. They skied basically the same route but faster so we didn’t meet but crossed and followed their ski tracks occasionally. They have also uploaded some photos online and you can find them from Kari Kossila’s album. (Psst! When we visited the bar few days after the guys, there was also beer and vodka for sale on the shelves – in addition to water and soft drinks. Lucky us!)

I’ll try to get a better set of pictures online at some point in addition to the promised aftermath posts. But it is quite summerish already and I’m more in a mood for planning new adventures than writing about past ones. So please, be patient.

Oh, and if you can guess what I’m planning you can win a free meal with dessert! Give a guess here! 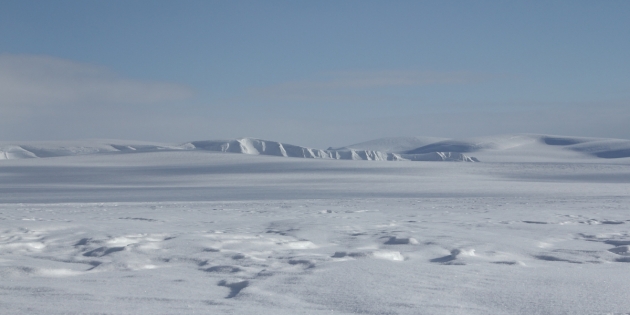 I am now back from my three-week expedition to the cold shores and jagged peaks of Svalbard. Ultima Thule 2011 is over but the aftermath has barely started. 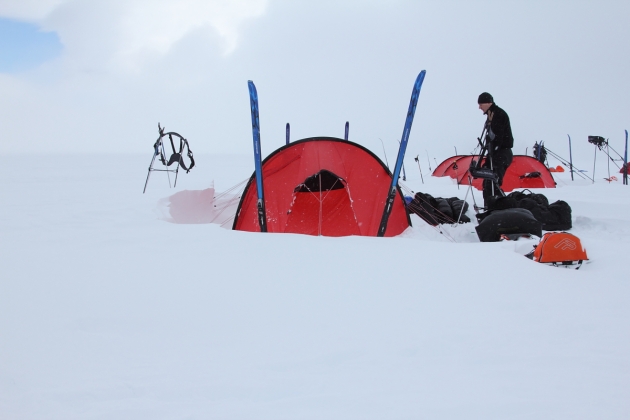 Tent after a blizzard. Spot the pulka on the left!

On Thursday we skied a tad over one leg to the warehouse where we mended and dried our gear. We took an early start at 07:00 and had enough time to do some shopping and eat lunch in cafeteria before receiving our rooms at the hostel. We didn’t sleep much during the day but instead mostly bought souveniers, packed gear for return trip, had a long dinner in restaurant and many drinks in the bar.

Expedition closing to its end. Longyerby in the horizon.

Taxis came to pick us up at the Friday night around 01:30 and we went to airport for the lat big gear hassle. It was a nice hassle trying to squeeze 23 kilo of gear to our bags, 12 kilo to our carry on packages and as little gear as possible to our sleds (they are quite expensive to fly around). At the end the airport stuff just surrendered and put the stickers on all the packs, most un-weighted, and everything was okay. A short nap at the airport floor and the sleepy flight to Oslo, a quick change at the Oslo airport and a bit less sleepy flight to Helsinki. We where back in Helsinki around 11:00 local time and were amazed by the warmth and green grass.

An arctic fox seen from the bar window. Svalbard is wild country.

And inspired by Joe’s old post, here is a short summary in numbers:

20 continuous night in a tent in a sleeping bag, personal record
300+ kilometers of skiing, personal record
1712 meters, the peak of Perriertoppen, the highest point of the expedition
100000 calories eaten
2-3 kilo of weight loss (less than anticipated)
1 full day spent storm bound
2 day spent partially storm bound
0 the day when tents were needed as a shelter for lunch break
1 badly burned nose now covered with salve
64 GB of pictures and video shot
+ 16 Celsius, the warmest temperature in the thermometer during the trip
– 25 Celsius, the coldest temperature during the trip

Last night I had a nice 11 hours sleep in a proper bed, for the first time for over three weeks. Most of the gear is sorted out and waiting to be washed. I have almost 64 GB of pictures and video to be processed so it will take some time. There are some randomly picked teasers in this post but most of the pictures are still waiting to be uploaded on the computer. And unfortunately I have also three weeks od undone work waiting for me, starting on Monday.

Despite the minor obstacles I plan to write a punch of post-trip posts and get a nice set of pictures online. But it will take some time.

At the moment I am planning:
– an in-depth post covering my personal views on the expedition in general
– a post about the food which was plenty and worked well
– a post covering major observations on gear
– two sets of pictures (set for those with more time and a very selected batch for those with less time or interest)
– some kind of video built from all the short clips along the way, but this one will take time as I have to first learn how to edit the stuff smoothly together

If there are some things that you are especially interested and would like to know more, please leave a comment and I will try to cover the topics in the following posts!

And it seems to be almost summer here in Southern Finland so I have to put skis and winter gear in the storage and search my summer gear. Before leaving to Svalbard I already bought a neoprene wetsuit (can’t afford a proper dry suit) so there are trips being planned and when there is something coming up, I’ll let you know!