Why are you leaving so early again, dear winter? 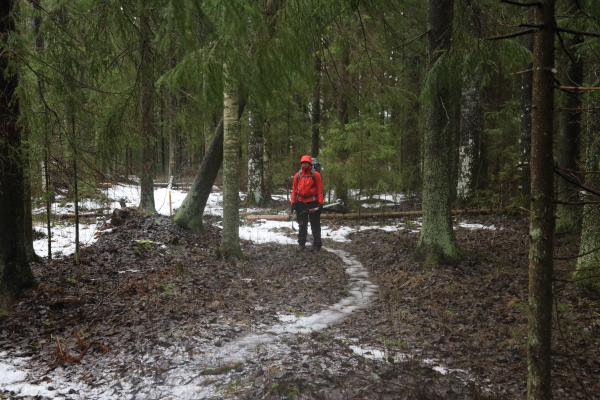 It seems that it’s time to say farewell to the winter who is leaving the Southern Finland too early again. Way too early. The winter here was short but not as bad as the previous one either: We had a decent amount of snow and the lakes did freeze but the temperatures zig-zagged around zero… But it was still pretty good winter. Most of my time outdoors was spent on guiding and instructing the Ankarat avotunturit courses. The time in between was spent mostly doing administrative work and preparing for what is to come.

My outdoor year started with some hunting in early January and included spending a night in open (though not public, but still free to use if you find it!) wilderness hut. My friend got the fox and an hour later I shot the manged raccoon dog. Traditional sit and wait hunt with not-so-traditional tools. No luck with hare the following day but a great start for the year anyway! 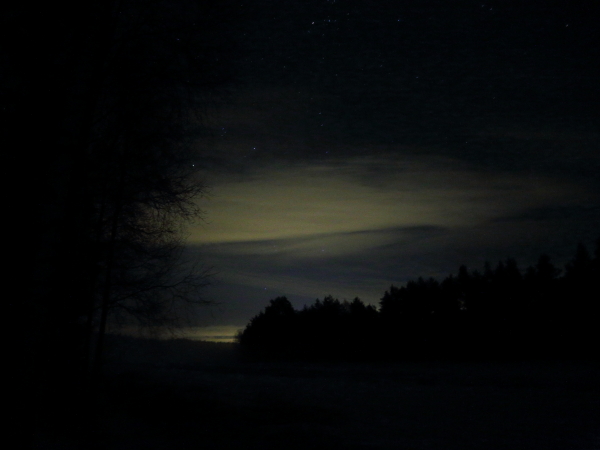 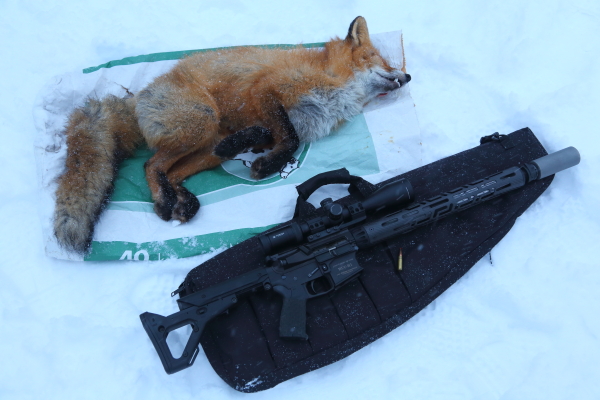 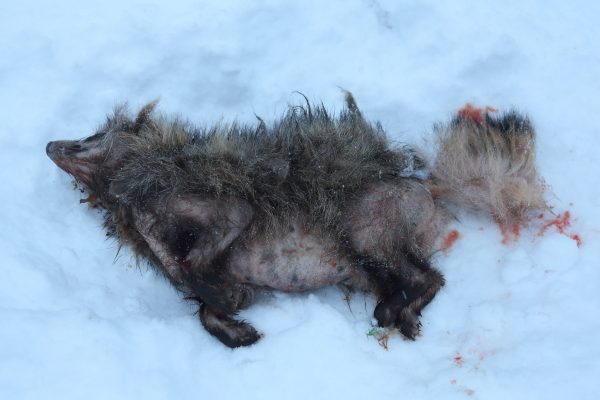 The first Ankarat avotunturit introduction course was held at the Syöte National Park. It’s a great location with open marsh plains and deep spruce forests framed by rolling hills. And with a guarantee of snow!

This time too, the snow was plenty but unfortunately the temps were around zero. I started with a solo overnighter to scout the conditions skiing with my OAC Kar 147s first from the visitor center to Ahmatupa hut (Great hut! Rent the key for the reservation hut to use the sauna if you visit it!). The next day I continued scouting the trails to and from Toraslampi doing a bit of bad orienteering as I forgot to take my map from the car the previous evening and thus missed the coffee and donuts at visitor center… 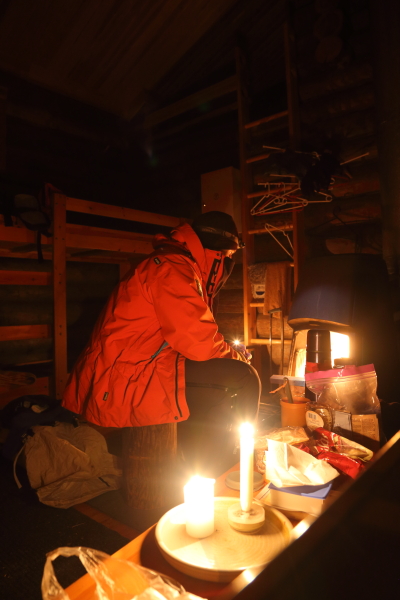 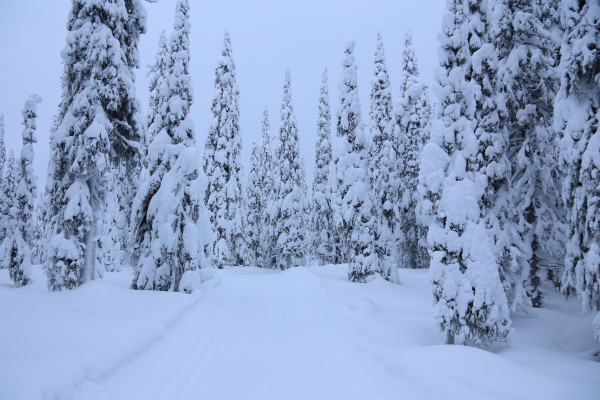 On the course we skied from the visitor center to Toraslampi and back spending a rather wet night in tents. Thanks to Hotel Iso-Syöte for the course venue! 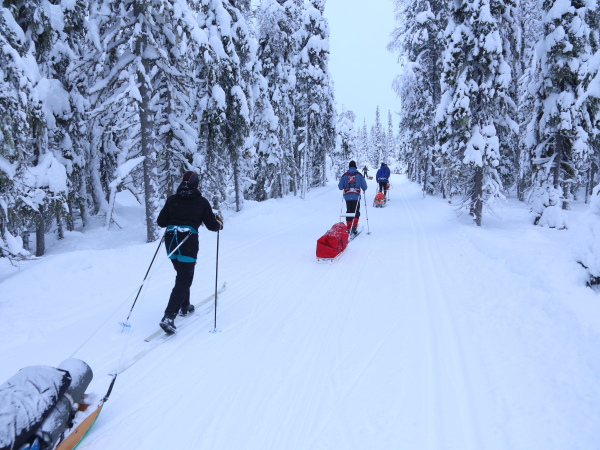 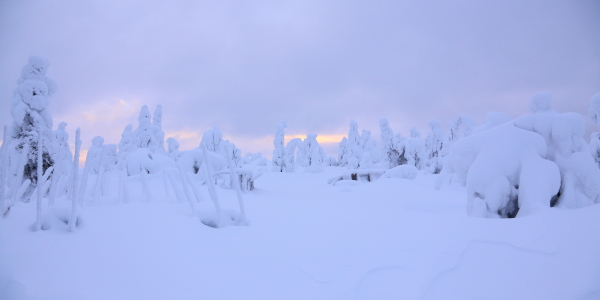 The next weekend we had the training trip of the Svalbard expedition crew (Huippuvuoret 2015). This was held at Padasjoki at Päijänne National Park which offered awesome surface for skiing, mild temps and a cooling breeze that helped to keep our tents dry. The crew did really well and I’m sure we will have a great expedition in Svalbard! The Kelvene area also inspired me to plan some packrafting adventures for the closing summer… 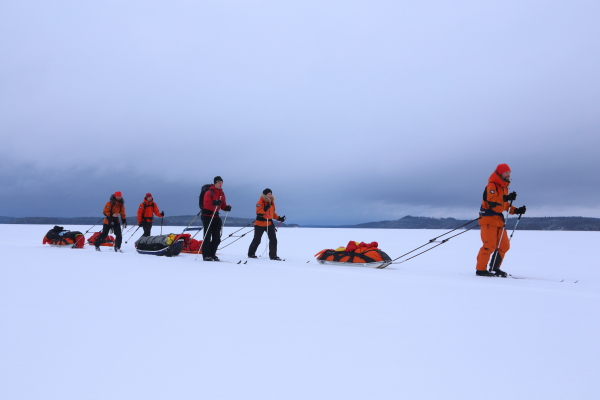 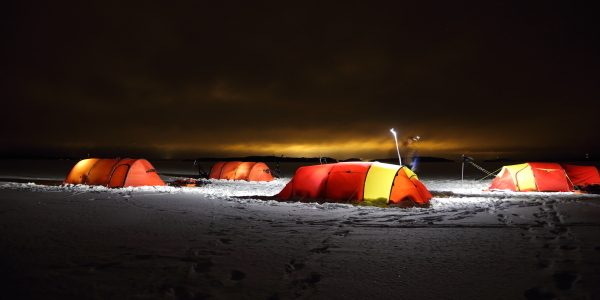 Then I had two more introduction courses. First at Taipalsaari skiing on the frozen Lake Saimaa. Again mild temps, wet snow and a fair wind in the evening which added a bit of challenge to pitching the camp on the ice. Good training. 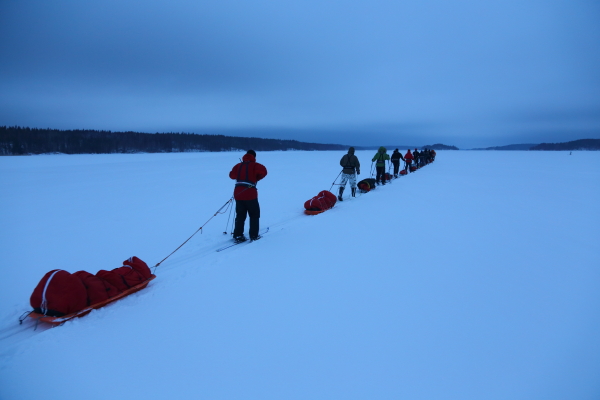 The second course was again at lake Päijänne but this time at Jämsä. Conditions were very familiar: overcast, mild temps and a bit of wet snow. The kind of winter we’ve had. Luckily I had a nice group of wilderness guides, students and teachers to add a bit of colour to the otherwise grey conditions. 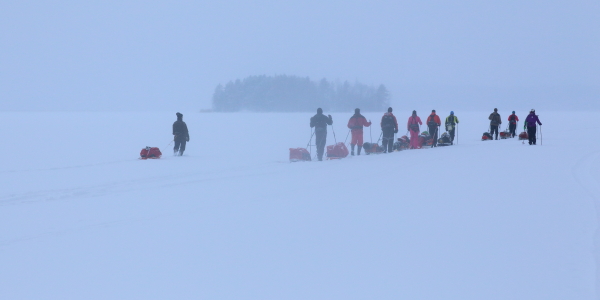 I was also instructing on the Ankarat avotunturit special courses related to safety training and first aid and expedition medicine. You can read more about them and see a few photos in the Avotunturit blog.

At the end of February I had time for an overnighter with N. We decided to explore the surroundings of our new home at Riihimäki. We had visited the groomed ski tracks and slopes of Riutta before for training and had noticed a map which showed a groomed ski track to some nearby shelters and fire places. We didn’t know anything but what was on the map. But that’s enough for a little adventure! Especially when you go without a map or compass only checking the map at the beginning of the trail and trusting that your phone will save you in case you get lost…

So, late on Saturday afternoon we packed the gear and headed to the ski track walking trough the dark slushy streets and drizzle. The winter seemed to be about to leave. The groomed track to Riutta was easy going but from Riutta there was no groomed ski track marked on the map. Just the signs of summer trail “Ilvesreitti” (click “Kesäretkeily”, “Retkeilyreitit” and “Riihimäen reitti”), but we assumed it would take us to the right place and after some open streams, road walking, forest walking and even a bit of skiing we found ourselves at the first shelter and called it a day. 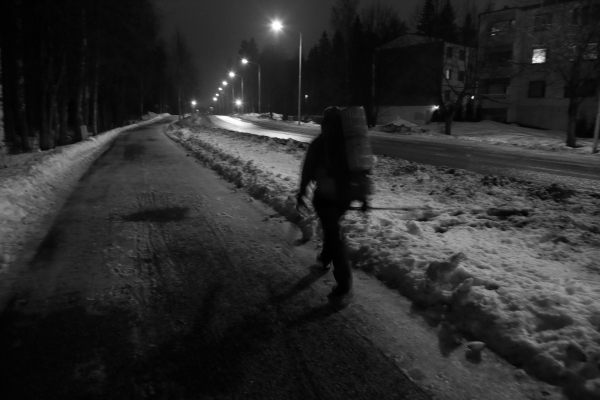 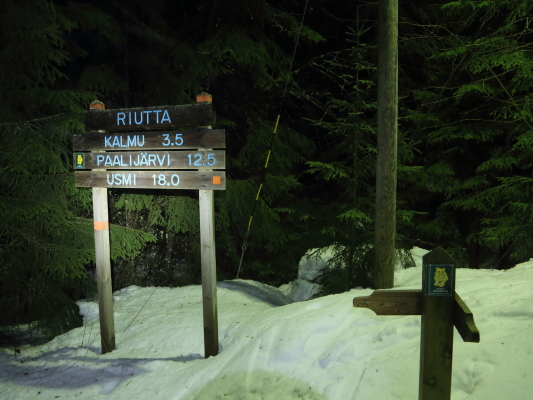 Nice dinner by the camp fire followed but the night was slightly uncomfortable as I had to sleep on me side because the benches at the shelter were too narrow for me to sleep on my back… Clearly ment for day visitors only. The morning welcomed us back on the trail with more rain and occasional shower of snow. In the daylight route finding was easier and we could ski a bit more but still had to walk every now and then to spare our skis. The snow was melting fast and the next week the only places to ski in would be the prepared tracks and open fields. 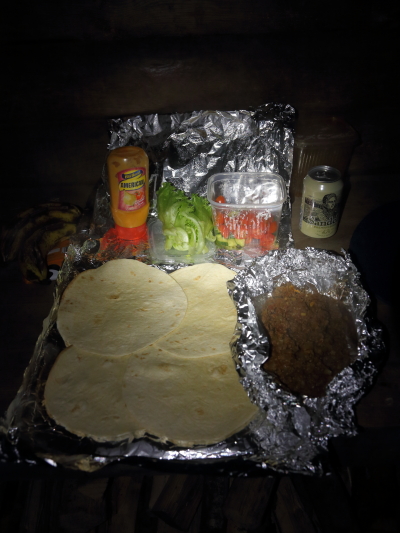 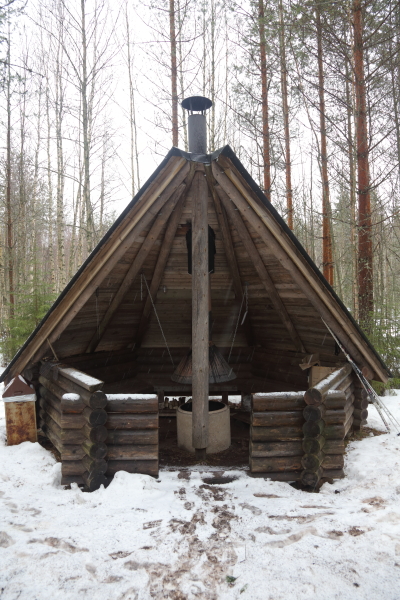 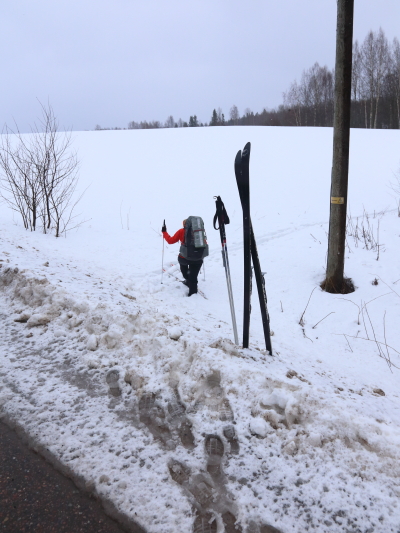 We were back home wet and with new scratches in our skis but happy none the less. The most important thing is to get out! 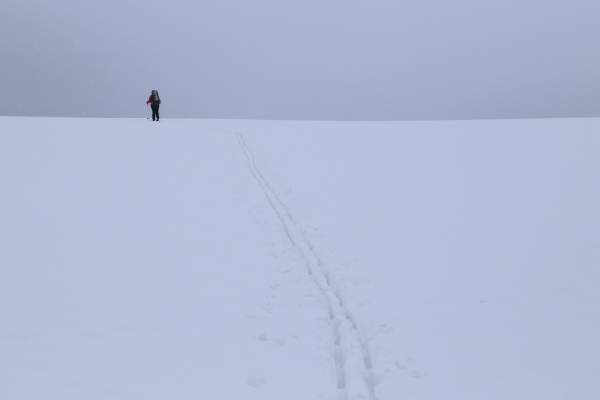 So, I managed to fulfill the first two months of the #twonights challenge! Six nights in January (counting the 31.1.-1.2.) and two in February. And even though the challenge is “closed”, you are still free to join for peer support and pressure to make sure you get a healthy dose of nights outdoors every month!

So it seems like it would be time to say farewell to winter.

But I don’t want to.

Hear this winter, I’m not finished with you yet! There is no mountain so high, cave so deep or wilderness so cold that I wouldn’t find you!

I’ll start from the fjells of Sarek in early March. And should you try to escape, I’ll be searching you from the cold shores and jagged peaks of Spitsbergen in April. And I’m pretty sure that in May I’ll find you from the glaciers of Iceland.

I’m not finished with you yet, winter!

This is again a bilingual blog post about guiding services I am offering. / Tämä on jälleen kaksikielinen tiedote tarjoamistani opaspalveluista.

This post is also to serve as a “commenting area” as the comments on pages are disabled. / Tämä tiedote palvelee myös kommentointi- ja keskustelualueena, sillä info-sivuilla ei voi kommentoida. 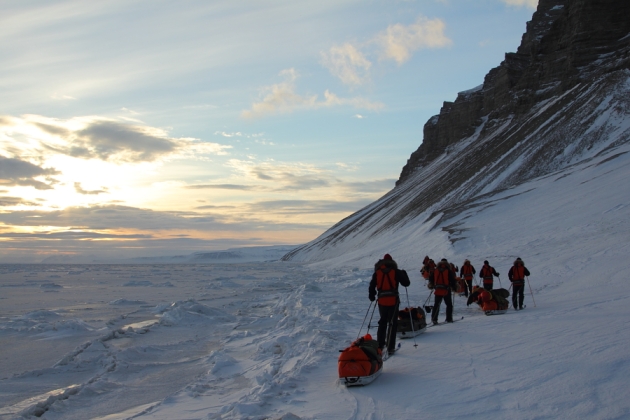 Templet, Svalbard. Would you like to go there? You can join me for expedition in April 2015!
– – –
Templet, Huippuvuoret. Haluaisitko sinne? Lähde mukaan retkikuntaan huhtikuussa 2015!

My winter 2015 will be mostly spent guiding for the Ankarat avotunturit ski expedition program. In 2015 the program offers selection of short courses, one-week ski tours and longer ski expeditions to the fjells of Lapland, to Vatnjakökull the largest glacier in Europe and to the cold shores and jagged peaks of Svalbard. And if you dare, you can join us on these memorable trips!

Most of the programs will be guided in Finnish only but we have a tailor-made, all-in-one program guided in English: The Crash Course in the Arctic Expeditions (click for more information)!

I will be personally guiding set of trips. As said the main language will be Finnish but except for the introductory courses you can get away with very basic understanding of Finnish and we can discuss things in English in addition.

More information available on the Ankarat avotunturit website but again in Finnish only.

Tailor made programs in English are also available on request. 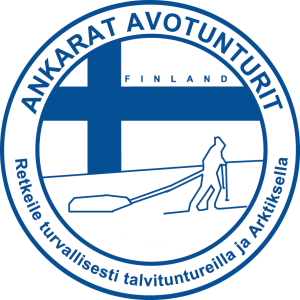 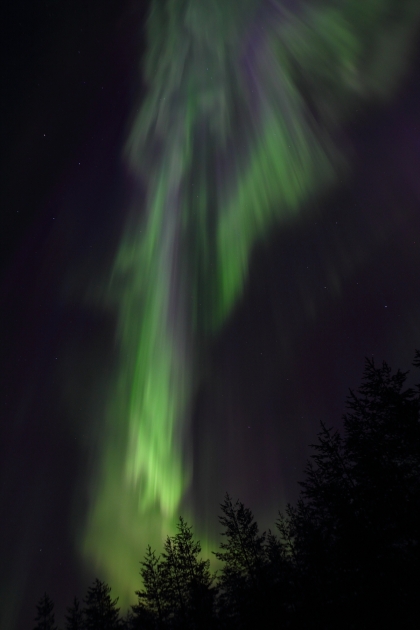 The blog has been little quiet, as has unfortunately been the way this winter. So, what have I been up to? 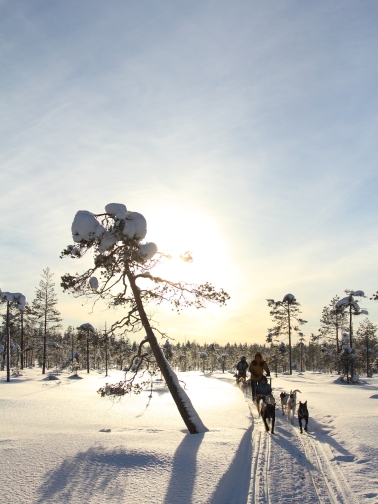 On the tours we spend the nights at huts but being out in the wild gives a good excuse to sleep outside and this week I decided to sleep in a quinzee as the night was expected to be a cold one. (The record low for this winter was recorded at Taivalkoski at the same week, -38,2C.) I was a little hasty building the quinzee and made the pile little too small and decided to go without the sticks to mark the wall thickness. The end product was livable but little too short with too big doorway and I had to patch one hole in a wall. But it still added apparently quite a lot of warmth as I managed to sleep most of the night comfortably in my sleeping bag rated to -18C (Tlim) and only woke up chilled a few times after 6.00 a.m. The cabin doesn’t have a thermometer but it’s in a cold place on low-lands next to big marsh so the temperature was likely colder than at the village of Taivalkoski… Snow shelters make sense! And there is still time to make some so don’t miss the chance! 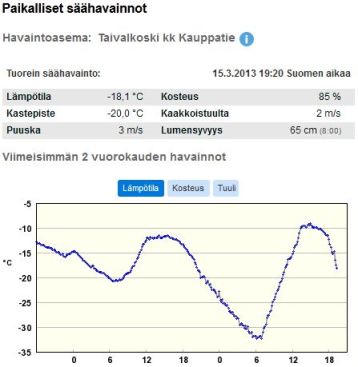 The little free time I’ve had, I’ve used for arranging the guided ski tours. The last week I was guiding a group in Sarek (along the route mapped on Social Hiking, though the distance listed there is little optimistic). We also made snow shelters in Sarek as a training and they were not bad choise as the night was cold. Snow caves are especially nice shelters if you happen to find pile enough pile of hard snow. It was an awesome tour with good group and well worth sitting in the car for 21 hours – each way.

Sarek. There’s a feeling of real wilderness. And beatiful mountains as well!

I’ll write a separate post about the tour in Sarek later as this post is about northern lights! As the winter has been unusually cloudy there hasn’t been much auroras to be seen at Taivalkoski. I saw a good show here on early December, little faint lights every now and then here and at lake Inari and nice but little grey light show at Sarek. But this evening was different. After several cold and cold nights without a trace of the northern lights the lights at the sky were on a big time! Here are some photos of the showon Sunday evening. Hope you enjoy the photos in case you missed the show!

For those interested in the techy stuff all photos taken with my trusty Canon 550D (with a battery grip with dual battery for the cold), the cheap but stellar Samyang 14mm 2,8 lens and of course utilizing a tripod (a heavy Manfrotto 055). The only problem with this setup is the Samyang lens being fully manual, which shouldn’t be much of a problem but the markings on the focus ring are all totally wrong andgetting it focused in the dark is not too easy. I think I should make some new marking on it…

On the weekend we also had the pre-expedition meeting with the Vantajökull 2013 expedition and I can’t wait to get on the ice for with the group as it’s likely to be a great little expedition… But before that I still have some weeks of husky safari guiding to be done, including two nice longer tours. I’ll try to get some nice photos to share from the tours.