A Friendly Reminder: Boots are not Forever

Traditional heavyweight hiking boots are considered to be very durable. And they are, at least compared to the lightweight trail runners favoured by many, me included. Trail runners seem to last around or under 1000 km while traditional heavy weight leather boots can last for several thousand kilometers.

But even hiking boots are not forever.

On my latest guiding stint two of my clients were using traditional high quality leather hiking boots about 10 years old. The boots hadn’t seen much use during the last years but were well maintained and seemed used but fine.

But after the first 12km both pairs started to fall a part: The outer soles started to detach from the heels and sides. Closer inspection revealed a well-known but often forgotten problem: The midsole material had reached the end of its service life.

The midsoles of most modern hiking boots are made of polyurethane (PU) foam. The PU foam can take a lot more abuse than the EVA foam used on trail runners but it seems that the type of PU foam used has a limited service life as a part of planned obsolescence (i.e. planned lifetime of the product). General consensus among experienced hikers is that the lifetime is around 10 years, 15 years at max. At the end of the service life the material starts to crumble and just disintegrate. There is really no reasonable way to fix this except changing the whole midsole.

Of course not all hiking boot midsoles are made from the disintegrating PU and there are more durable options out there but the PU with planned lifetime seems to be the norm nowadays. This was also the case with my client’s boots: around 10 years old and reached the end of their planned service life quietly in a closet without much use for a while.

We survived by scavenging some old slashed rubber boots that we lined with neoprene booties and the other client decided to test the barefoot approach in practise by hiking several days with heavy rucksack in thin neoprene diving booties with insoles from the hiking boots and double socks for extra padding. We also fixed the hiking boots with some paracord and duct tape (if you bring any duct tape, bring a lot!) to be used in the descent to the Reisadalen canyon and they worked well enough for that bit.

But to avoid getting into the situation: Check the conditions of the midsoles of your boots! Especially if you haven’t used them for a while, which is probably the case for many of us who have changed from traditional boots to lighter footwear. And if you’re taking your old boots for a big hike after some time, go for a test walk before the big thing.

Inspired by this I’ve decided it’s better to sell my old heavy-duty boots as they still have many years left in them and I don’t have enough use for them. So, if you’d like a pair of Meindl MFS Vakuum GTX boots in size 48 (good secure fit for size 46 foot with double socks) for reasonable price, please contact me! 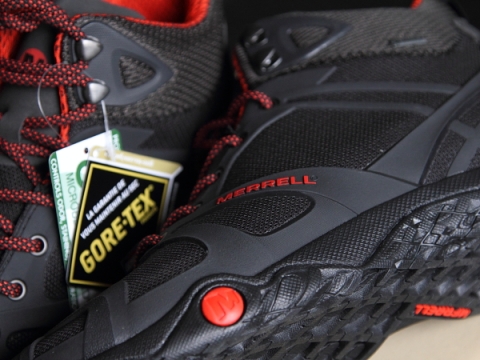 My Inov-8 390s failed me after few hundred kilometers so here’s my new choise for the shoulder seasons: Merrel Proterra Mid Sport with Gore-Tex.