The Expedition in Brief

The Ultima Thule 2011 expedition was my main project for winter 2011. It was a three-week long unsupported and unassisted skiing expedition to Svalbard taking place in April 2011.

The objectives of the expedition were to:

– do an unassisted and unsupported three-week ski expedition,
– climb the highest fells of the island of Spitsbergen: the Newtontoppen (1713m) and Perriertoppen (1712m),
– to cross 79 degrees North
– and see a polar bear in its native environment.

We succeeded in three of these five objectives. We made a succesful three-week ski expedition, climbed the Perriertoppen (1712m) and crossed the 79 degrees North. Unfortunately bad weather prevented us from getting to the top of the Newtontoppen and we didn’t see a polar bear, only old tracks in the snow. None the less, it was a great trip. 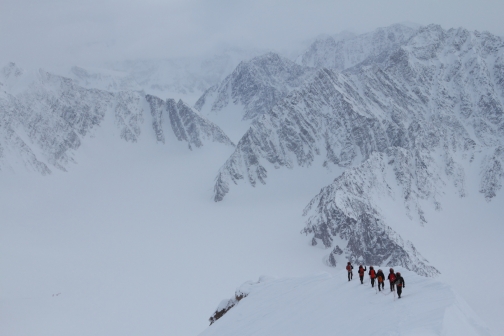 The view while descending from Perriertoppen. Our camp barely visible in lower left corner.

The Background and preparations

The expedition was led by Finnish Arctic and winter travel veteran Kari “Vaiska” Vainio led an expedition to the North Magnetic Pole, one across the Greenland icecap and  several expeditions to Svalbard. In addition to arctic expeditions he arranges climbing expeditions, scuba diving courses and hunting and fishing trips. More information can be found from Vaiska’s website (in Finnish). There were 12 members in the expedition with differing backgrounds but a common interest for artic expeditions and previous history on taking basic courses arranged by Vaiska.

The path to Svalbard starts with short weekend course held in the Southern Finland in January. The course consists of lectures and a short overnight skiing trip. The weekend course is followed by one week skiing trip in Sarek Nationalpark in the Northern Sweden in March. I took these courses in 2010. In addition to these courses we had two weekend meetings related to the expedition and of course did training trips on our own.

In storm on a training trip in Sarek National Park in March 2010.

A three-week self-contained expedition in a relatively remote arctic area requires a lot of preparations. In our first meeting we formed teams to take responsibility on different things to do. As I have always had a special interest for gear I found myself as the head for the team in responsible for gear. Most of the expedition members had already adequate gear but there has been a lot interesting work to do with different manufacturers and suppliers like Finnsvala, Nahanny, Cumulus and Varuste.net. Just arranging orders worth over 10,000 euros and getting the gear delivered to the expeditions members was an interesting task.

Freeze dried food from Fuizion for the expedition.

I have always had an interest towards (Ant)Arctic expeditions and exploring remote and cold areas. this has mostly manifested as arm  chair adventuring but somewhere around 2008 I decided that I’d want to also do trips like the ones I had been reading about. The next year I started winter hikes in Lapland. In 2010 I participated on Vaiska’s courses and did more winter hiking and in 2011 I did a lot more winter hiking and did the three-week trip so Svalbard. And I’m guessing it won’t end there.

How did it go

As mentioned in the beginning the trip went quite according to the plans and I had great time. To be precise the expedition took place between April 7th and 29th in 2011 meaning that we spent 21 days on the ice and one day travelling each direction. We had flights from Helsinki in Finland to Longyearbyen in Svalbard and to get a bit distance to the city of Longyearbyen we took a bandwagn ride on the first day of our trip but in the end skied all the way back to the city. We skied around 300km on our own and didn’t see other people for over one week. In addition to Perriertoppen (which is a beautiful mountain in gorgeous surroundings) we also visited the abandoned Russian mining settlement of Pyramiden which was an experience on its own – especially as there happened to be a bar that was open! The nature and landscape in general was really, really beautiful.

The weather was surprisingly good with mild and even warm temps and very few storms. We had to spend one whole day and two halves in tents waiting out storms and unfortunately one stormy day prevented us from getting to the top of the Newtontoppen (1713m) but otherwise we had mostly nice weather with little wind and warm temperatures but also some white-out conditions. 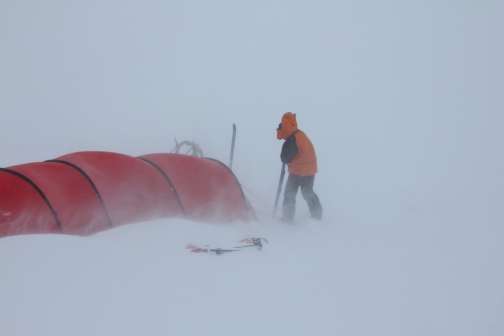 A stormy day spent in tents.

Nearly every day was a good day. Occasionally the days felt repetitive and some hours were mentally hard but mostly I enjoyed every bit of it. The low points might include few times when the expedition was progressing very slowly and I would have wanted to go faster. Then there is also the decision not to summit the Newtontoppen (Which probably was the right thing to do anyway.) And of course the moment when the expedition ended – I would have wanted to do more. The best memories are related to summiting Perriertoppen when the clouds broke and the incredible view opened, skiing in good weather, admiring the mid night sun and Northern Fulmars while in bear guard duty, silent and calm moments when walking outside the camp in the evening, finding the bar in Pyramiden and exploring the city in general, enjoying the sun topless on a very warm lunch break and skiing on moving sea ice in the beginning of the expedition. It was all very much worth it!

The first midnight sun of the year.

The people on the expedition were all good and nice folk and it was a real pleasure to share the experience with them. A big thanks goes to my tent mate Matias who was about the best expedition partner imaginable: we never even a slightest argue about anything. Worth a mention is also Janne’s endless energy and his great sense of humour on the expedition comms and on radio. And of course big thanks go also to Vaiska for putting it all together and sharing his experience with us.

My 25th birthday party celebrated in a tent.

All the gear and food I had worked adequately though if I’d do similar trip again, I would do some things differently. The food is very much covered in a separate blog post and  I’ll cover the gear part later.

Posts related to the expedition

– The average day in the Arctic
– Expedition food
– About gear and the final gear list
– The final expedition meeting, a training trip and another training trip

Updates from the ice (In January 2012, these are still waiting to be spell checked…):

Expedition aftermath (In January 2012 many things are still drafts…):

A large set of photos from the expedition is available in my gallery.

In addition there is also the official expedition website and blog but both are available only in Finnish.