Shoulder seasons are interesting time for outdoor activities. An unusual mix of seasonal activities is possible, many things are little more challenging than during “normal seasons” and even popular destinations are usually quiet so you can have the wilderness for yourself.

N had holiday on the last week of October but as I had some work to do a normal one-week hiking trip wasn’t an option. So instead we did something else. It was rainy and grey with temperature around +6C in the South-East Finland so North sounded like a better option. As we both wanted to visit Husky Center Kolmiloukko (we both had been working there the previous two winters) the North-East* was the way to go. (* In Finnish the are called Koillismaa meaning North-East land even though it’s still far from the most North-East parts of Finland…)

The owner of Kolmiloukko had said we should take skis instead of mountain bikes and we believed him and left the bikes at home but took packrafts instead of skis. Once we arrived at the snowy North-East we started to think if we should’ve taken the skis after all… The first days were spent at the Kolmiloukko catching up, reconnecting with the dogs training for the upcoming season and of course playing with the adorable husky puppies! 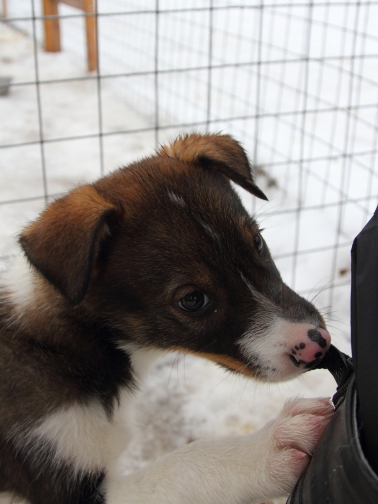 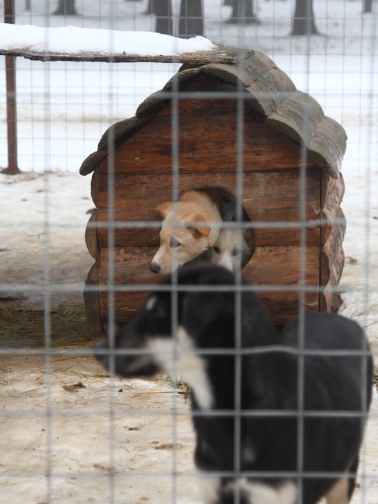 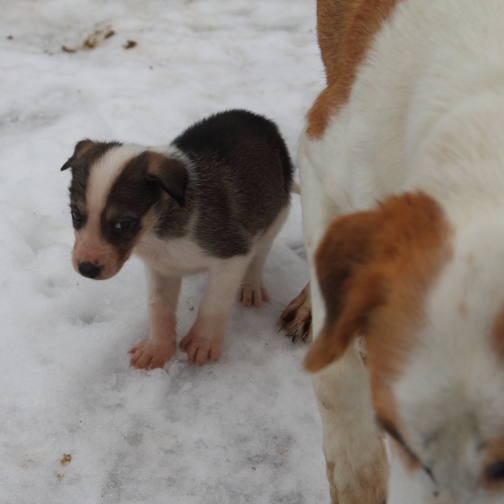 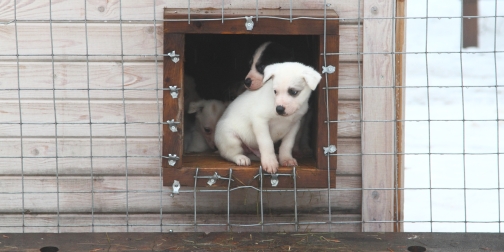 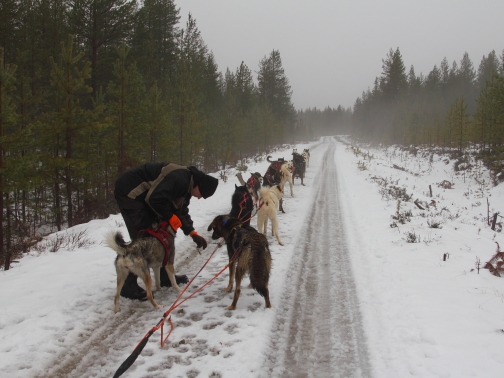 The main trip of the week was to be a packrafting trip at Oulanka National Park. There are plenty of interesting rivers at the area ranging from small streams to roaring class V drops. As N isn’t that familiar with white water packrafting we chose Savinajoki, a 15km long class I-II river, as our destination. We got the starting point little late and from the bridge it looked like there would be little water and plenty of ice, especially as there were some lake sections in the beginning. Well, it’s shoulder season so ice is part of the game. As are short days. The two combined lead to quick decision of not boating all the way but hiking at an open wilderness hut near the mouth of the river and doing a day trip from there. The hike in turned to be some 6km longer than expected as the last bit of road was not accessible with our car.

With badly packed packs we hiked to the hut arriving in the dark around 17 pm. Short days also mean long evenings so a hut or comfortable shelter is welcome. And so is good slow cooking food and loads of hot beverages. And we had both. Perfect relaxed time in the backcountry. There had been a group of four hikers from the UK at the hut the previous day but during our stay we didn’t see anyone else and had the hut for ourselves.

The next day we started to hike upstream the Savinajoki river scouting on the way when possible from the trail. The 80-kilometer Karhunkierros trail follows the river before reaching its Northern terminus at Hautajärvi and crossing the Arctic Circle. The Savilampi lake at the mouth of the river was mostly frozen but the river was mostly free of ice. The water level was very low, even lower than on average in the late summer or autumn but it still looked quite packraftable.

We didn’t walk all the way up the river but pushed to the river through the snow and forest maybe one-third of the way from the lake. We had some hot tea from Thermos bottle and energy from bars to keep us warm as we inflate the packrafts and put on the secret weapons: Ursuk drysuits. I have no desire to go white water paddling on shoulder seasons without a proper dry suit. N was using my prototype packrafting specific suit which is two or three sizes too big for her so it was little bulky and the neck didn’t seal properly but it was still a way better than only wearing hard-shell clothing.

After breaking few meters of ice we were in the nice flow going down stream with decent speed. We got stuck on rocks every now and then but mostly it was good going maneuvering around rocks and occasional bigger wave. Typical rocky class I-II river with low water but enough water to keep it enjoyable.

The paddling went fast and soon we were at the Savilampi lake and reached the edge of the ice. The ice wasn’t strong enough to support a packraft for pushing ourselves over it but was weak enough to be break under the bow of the packraft when paddling vigorously. This was hard work but I was quite happy as it warmed up my fingers that had gotten very cold during the downstream part. 3mm neoprene gloves are not enough for me with aluminium paddle and temps (water and air) near 0C.

First we tried to break our way straight across the lake towards the hut but that didn’t work. There was just too much ice. After a while we turned towards the Northern shore and were soon walking on top of an esker back to the trail and hut. More real food was cooked, hot beverages were consumed and pancakes were enjoyed. Good time. A top tip for spending long shoulder season evenings at huts is to bring candles! And a book. N had one, I didn’t but would’ve liked to have one.

The next day was the walk back. We planned to go along a different route following first a 6-kilometer Kanjonin Kurkkaus trail along the canyon of the upper Oulankajoki river and then head to a forest road back to the main road and our car (parked at a local farm with the kind permission of the owners). There had been a proper autumn storm on the area and several fallen trees blocked the trail giving a bit of extra wilderness feeling to the otherwise well-marked and established trail. The river looked awesome and the big rocky cliffs were very impressive. I’ll be definitely back – when there is more water! But I’ll be down in the canyon in a packraft…

Once at the road we had learned our lesson from the first day’s walk-in with the heavyish packs and utilized a packraft as a sled pulling the loads instead of carrying. A great option on easy terrain (like a snow-covered forest road).

After the packrafting trip we spent some time at a cottage at Ruka (a fjell with a skiing center) and did a day trip to one of the most famous and frequently visited trails in Finland: the 12-kilometer Pieni Karhunkierros trail. It’s a nice trail following the scenic riverside of Kitkajoki river and crossing the old-grown spruce forests of the area. As it’s very popular trail it’s very well-marked and established and even eroded and worn. Going there during the shoulder seasons has advantages: fewer visitors and the snow covers parts of the infrastructure and erosion so it feels more wild – and you also probably smaller impact as you walk on snow!

We were again on the trail little late and had to hurry a bit to get out before the dark but it was a nice day walk. For me the Kitkajoki river was naturally the most interesting part. As the water level was low the class III Myllykoski and class IV Aallokkokoski didn’t seem too bad. If I would’ve had a dry suit in the car I would’ve been very tempted to drop the walk and paddle the rapids with my packraft. But as I said: no dry suit = no shoulder season white water paddling. And my suit was drying at the cottage.

The next rapid dowstream, Jyrävä, was about as scary as I thought it would be. A rocky nine meter drop with water squeezing between rocky river banks. With low water it didn’t look much easier, only more rocky. Not for me. At least not yet and probably not with a packraft. The rest of the trail was more in the woods with occasional glimpse at the river until the trail crossed the river and ascended up to the forests to return back to Myllykoski rapid.

On the trail I was missing two things: proper gaiters and walking poles. As plan was to spent most of the time in dry suit I didn’t take proper gaiters to accompany my Merrel Proterra goretex mids (goretex mids are great for the shoulder seasons). And as I don’t usually take poles for packrafting trip I didn’t have them with me at all. Both would’ve helped a lot in the snow.

As a conclusion the week was quite succesful: peaceful and relaxed with nice views even though the weather was mostly grey and uninspiring. The little packrafting we did was good and I’ll be definitely returning to the area in summer when the temperatures are warmer and there is more water in the rivers. It’s a great destination for packrafting!

5 responses to “Shoulder Season Chill Out”