The second of the three #HikingNorth trips is done and me and N are heading towards Sarek National Park for the third trip before returning back to South. While we are hiking in the Sarek, here are some pictures from the second trip from Kilpisjärvi (Finland) to Reisadalen (Norway). It didn’t go quite according to the plan but turned out to be a nice packrafting trip after all, thanks to the great float down the Reisaelva river.

The trip started from Kilpisjärvi on Monday morning – in very uninspiring rain. As we gained altitude the rain turned into wind-driven sleet and soon into snow. The temperature was around zero and it started to look more like an early winter trip than autumn trip. As the shell clothing slowly failed and the weather stayed miserable we decided to cut the day short and spend the first night in open wilderness hut at Saarijärvi. 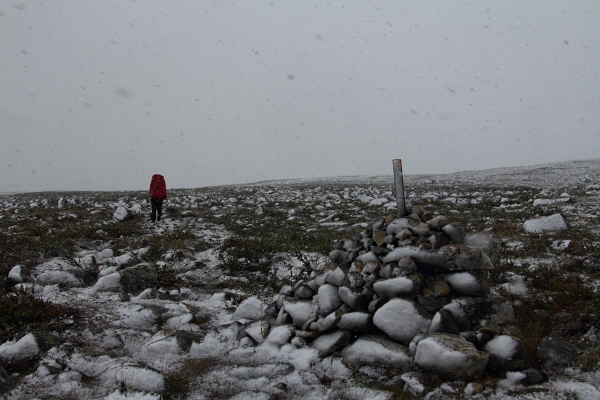 The second day the weather improved a little bit being mostly foggy with a bit of drizzle. The views at Kuonjarjoki seemed quite similar to what Mark and Roger had about two months earlier. After a lunch break at Kuonjarjoki we continued to Meekojärvi. As we descended down to the valley the clouds broke for a while. We slept  in tent near the open hut at Meekojärvi with large reindeer guarding the surroundings. 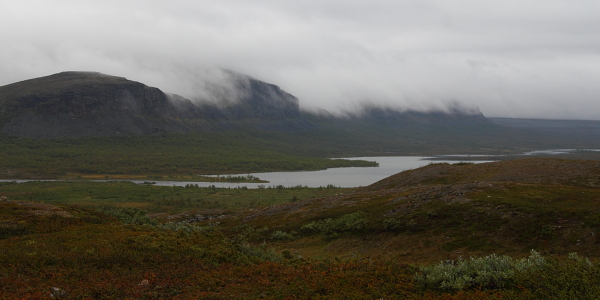 The next day was supposed be the start for one and half days of packrafting the lake system from Meekojärvi to Porojärvi followed by a section of the Poroeno river. After pushing through the thick bush to the shore and getting the packrafts inflated we soon found the wind to be too much for the little rafts. We had about 45 degree head wind that was high enough to create breaking waves on the small lake. This made paddling hard and slow and thus we soon decided to pack the rafts and walk the Northern shores of the lakes towards East. And as we were already nearly a day behind our schedule we decided to skip the Poroeno river all together and take a short cut walk to Reisadalen. This saved us a day but we also missed the big river packrafting… 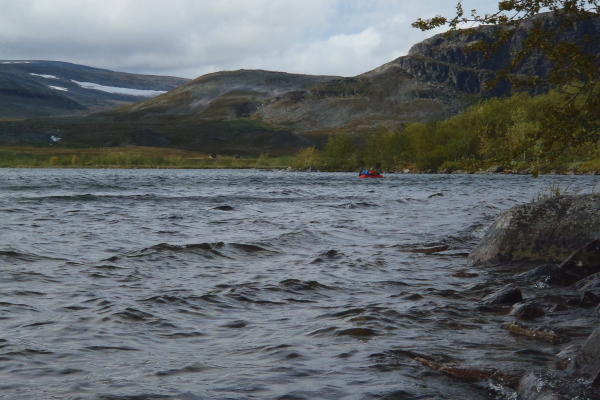 We crossed the Valtijoki river which had considerably lower water level than in mid-July the last year. The water level was probably too low even for packrafting.

On the first two days on Kalottireitti trail we met something like over 40 people but during the third and fourth day going off-trail we did’t see any humans, only reindeers and birds. After a hard day of walking (the rucksack felt quite heavy with all the packrafting gear) we camped near the Norwegian border at Inggajärvi lake. 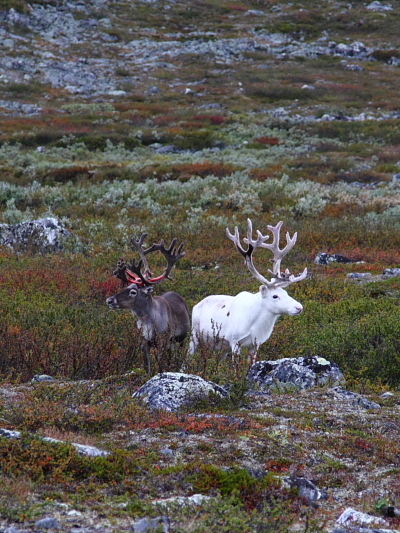 The next day we crossed the border walking towards Reisadalen with the Jierta fjell as a landmark in the horizon. On the way we crossed Gieddajohka river with one packraft (taking first packs to the other side and then N). After the disappointments when trying to paddle the lakes it made me feel that there was maybe some point in carrying the packrafts after all. At least we didn’t have to swim. We camped on the shore of a little lake with reindeers accompanying us.

The fifth day started with rain and overcast but it didn’t slow us down. The slope down to Reisadalen valley was occasionally a bit hard, maybe a 30 degree slope with wet crass and as the soles of my trail runners were pretty worn out I took occasional slides down the slope but luckily there were trees to stop the glisades. After the descent we arrived to Neddrefosshytta, admired the surroundings, had lunch and inflated the rafts and started the float down. 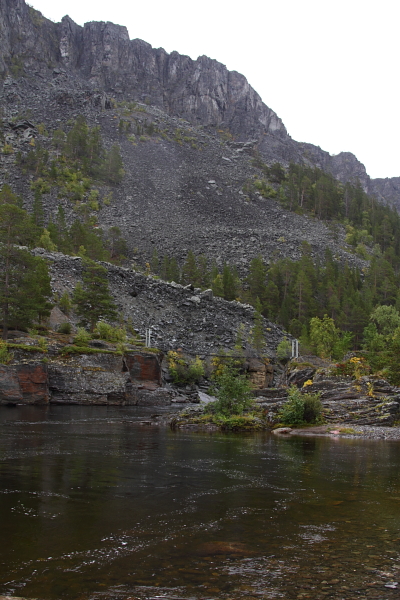 We floated only about an hour as I wanted to find a good camping spot well before the dark. And we found a very nice spot on a gravel bar with enough drift wood for a small fire and good views to the surrounding canyon. Rain showers and some late-season bugs (no bugs up on the fjells but quite some in the valley) interrupted occasionally the evening by the fire but it wasn’t too bad. 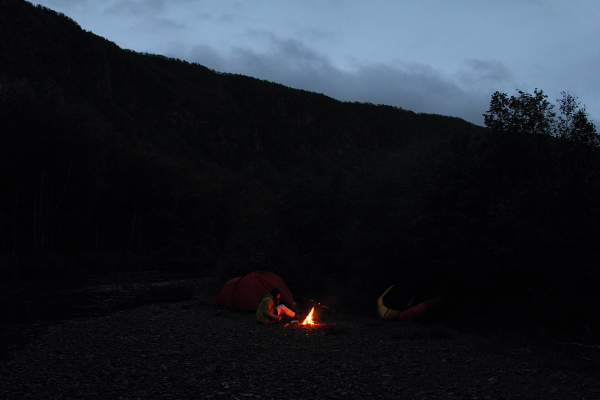 The final morning of the trip broke with spectacular views and we finally got some real sun shine! Morning chores were soon followed by a good swift float down stream the easy but fast river. The Reisaelva has a good flow and there are no real rapids on the way from Neddrefosshytta to Saraelv and thus it makes great packrafting also for beginners.

A little downside on the Reisaelva is the quite frequent boat traffic up and down the river. This didn’t bother as too badly but it removes the feeling of real wilderness quite effectively.

The canyon/valley is a great sight in itself but one the major sights on the way is the Mollisfossen waterfall. Unfortunately it’s on the other side of the river than the Kalottireitti trail but for a boater that isn’t a problem at all. And the 269 meter high waterfall is worth a visit but crossing the river without a boat would require swimming is swift current. 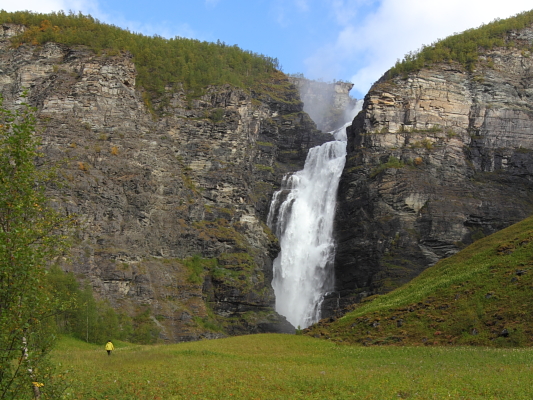 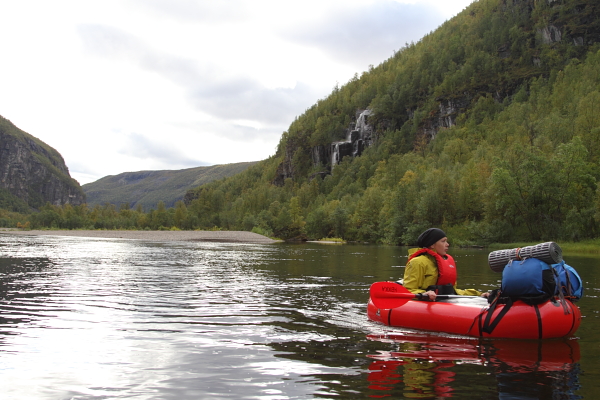 The 25km float from Neddrefosshytta to Saraelv (the end of public road with a good parking space) took only about 6 hours of lazy packrafting so it is good float! Even though we had to skip about half of the originally planned packrafting the Reisaelva saved a lot and left me wanting more. I think that on this trip I also understood better the role of packrafts as wilderness travel tools in addition to tools for accessing remote rapids and having easy white water fun. The packrafts are equally suitable for both, though for wilderness travel one should reserve enough time for things like serious headwinds on flat water. Our schedule didn’t allow any slack and it would be better to reserve around eight days for the originally planned route (instead of the six days we had).

Once again The Social Hiking map (based on Yellowbrick beacons) gives you a good idea about the trip but once again the distance covered (149km) feels quite a bit exaggerated. The Yellowbrick YBlog page gives you some additional info like some speed figures. Pictures linked to the map are coming later when I get the last week+ trip in Sarek done… And you can also follow the trip on Social Hiking as well as on Twitter!

7 responses to “Packing the Raft – Kilpisjärvi-Reisadalen”