Even though you may not believe it, I’m not dead. I’ve just been busy and lazy. To fill you up what’s been going on lately, here is a brief summary of the past 1+ month of silence – and some cool links & videos.

After the guide school ended at June 8th we had a nice closing for the year on a lean-to with great food, tent sauna and good company. The next day I drove to home, packed my new HMG Expedition rucksack, slept few hours and headed North to Muotkatunturit and Paistunturit wilderness areas. There I hiked 10 days and about 165km with my girlfriend on the gently rolling hills and had generally good time though it also felt a bit boring towards the end… More of this with dozens of photos coming up sooner than later.

Having good time with the fellow wilderness guide (students). 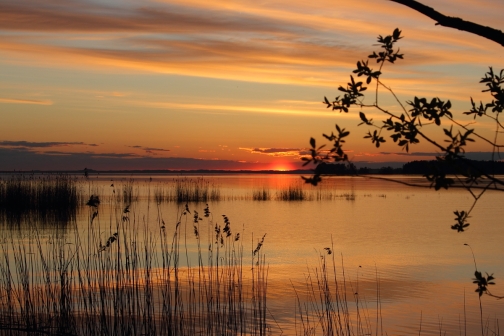 A spectacular sunset to end the year on a wilderness guide course.

After the hike we drove back South, picked up a friend on the way and had nice midsummer weekend with some old friends. After that I started two weeks of about non-stop work related to security at certain fair and now I’ve had couple of days of holiday. I’ve been pulling tires, canoeing, walking, picking blueberries and doing other little things around the house. I could say I’ve been lazy, especially with the piled trip report drafts but at least I got the photos from the last hike sorted. 😉

Somewhere at the Southern parts of Muotkatunturit wilderness.

At the top of Kuorvikozza in foul weather.

So, while I’m enjoying my holiday and putting together the trip report, there are many other cool things to read and watch in the internet. And as Hendrik’s great TWIRs are on pause at the moment I decided to pick up ans share few things that I liked:

Alex Hibbert has been hinting about a mysterious upcoming big expedition for some time now. I’ve been lucky to know about things in advance but now the plan has gone public and it’s a big one. If you’re interested in Arctic expedition stuff take a look at NORTH 2012. The first part will start in December 2012 and last about 90 days. And the second part starting at the end of 2013 will be even bigger!

There’s also another big British expedition taking place at the end of this year. This one will happen at Antarctica where Ben Saunders, Alistair Humpreys and Martin Hartley aim to accomplish Captain Scott’s walk to South Pole and back. For those more interested in the Antarctica: Scott2012. Alistair also put together a nice video about their training trip in Greenland.

And the third skiing related pick is a trip report including also mountaineering and packrafting and is pure epicness. The Logan Traverse by Luc Mehl & co: 30-day, 370 miles, one avalanche, few dead ducks and sheer epicness. There is a story in Sidetracked magazine, more information at thingstolucat.com and nice video

I’m not much of a kayaker and even less into freestyle kayaking but I really enjoy a good video when I see one. And here is one very cool video “Of souls + water” and another very cool video about the next generation going down big rapids in a big canyon. Enjoy!

Backpacks – or actually about making them

Backpacks are essential for backpacking. I’ve been following Dave’s Bedrock and Paradox blog for sometime and really like it. His analytical and perfection seeking style and enthusiasm about backpacks has led him to write several posts about structure of backpacks and how to build them. This is very valuable info for the MYOGers but also helps the regular rambler to understand why some rucksack deliver and others don’t. There is the Backpacks for the woods series with posts 1, 2, 3 and 4, new posts about The black and white pack and The 610 pack and a recent one including some pack mods.