The last of the season

Everything comes to an end. And so did the skiing season of the year 2012. (And as you might have guessed, this is not a trip report from Vatnajökull, sorry for that. It’s still under writing…)

Today was a great day! Probably the warmest day of the spring this far with temps closing to +15C with blue skies and hardly any wind. It was also a good day to end the skiing season for this winter. There’s hardly any snow left to ski in the Southern Finland but there is still ice on the lake and snow like slush on top of it. And as it was freezing the night before I though it would be good for skiing.

I slept long, lounged around eating Sunday brunch and got on my skis around noon, way too late to make use of the thin layer of crust formed during the night. I packed some spare clothing into a dry sack, tossed a bottle of juice to the side pocket and attached the skis to my backpack. (By the way, the Osprey Talon 33 is totally lacking sensible ski attachment points!) I walked to the lake to find nice and skiable ice near the beach at the shadow of an old grown spruce forest. 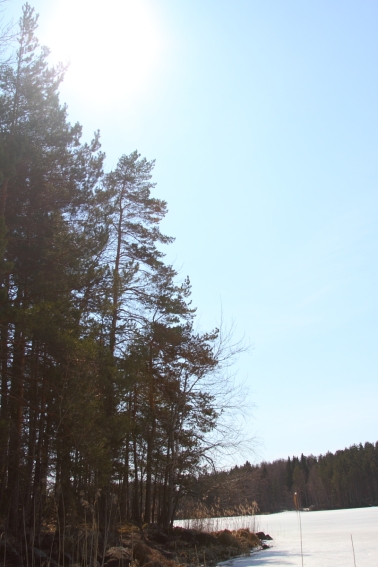 Skiing started good and felt great after fwo without skiing! I followed the shore line towards a little island some five kilometers away.  I tried to ski as much as possible along the whiter areas on the ice and follow old snowscooter tracks when available. And I really tried to avoid the very dark areas: signs of thin ice or open water. This went quite well and for most of the time the thin layer of frozen slush (on top of very wet slush followed hopefully by strong layer of ice) carried me well but was soft enough for proper kick and glide. Judging smart route became soon automatic and skiing was good.

Sun shine from the blue sky and no wind. It was really warm! A T-shirt and shorts would have been better option than long trekking pants and a powerstretch fleece but I wanted to have some padding in case I’d fall through the ice…

But I managed to reach the little island without falling in the ice and went for a little walk on it listening to the concerto of birds, unfortunately not being able to identify too many of them by the sound (as I should be able to by early June to pass an exam). I drank some juice, ate few candies I found from my pocket and jumped back on my skis after enjoying the sun on a rock near the shoreline. 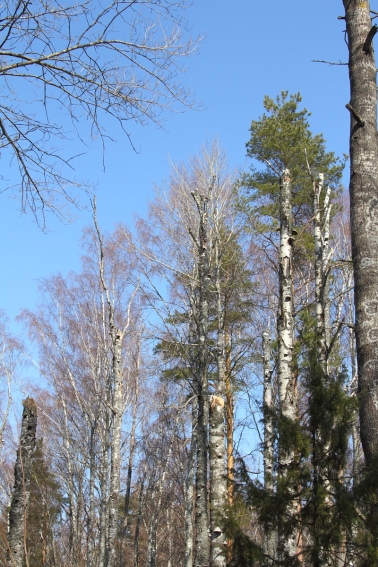 On my way back the sun had done its job and the surface of the ice was soft and I fell into the slushy layer several times. My boots were thoroughly wet (at least I got confirmation for them leaking as they seemed to be doing already in Iceland) but in the nice warm weather it wasn’t a problem. Skiing back on the ever softening ice, many times pushing trough ankle-deep partially frozen slush was slower than the good skiing to the island and the way back took about 45 minutes instead of the half an hour. 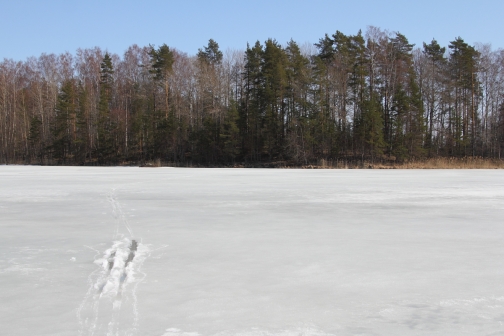 I came back to the shore, took of my skis, improvised yet another way to attach them to my backpack and walked away on the sand. That was it. The last skiing trip of the season. Next, it’s hopefully packrafting, kayaking and other spring-time outdoors things.

For outdoors oriented people the spring is interesting time in Finland. At some point in April or May (depending on the year and where you live) there is a short period when many kind of outdoor sports are possible at the same time and around the same area: There is still snow to ski, but sunny forests are snow free for walking as are little dirt roads for running or biking. Tivers are running free of ice for kayaking, canoeing or packrafting and flooding enables running the little streams usually too small for any kind of boat. And it’s also warm, there is already plenty of daylight but no mosquitoes! It’s truly magnificent time of the year, though only for a very short period of time.

I originally planned to take the advantage of this short period and do a combined skiing, hiking/running and packrafting day trip but unfortunately I was a week too late for my plan as the ice on the middle of the lake was way too rotten to safely cross. The original plan included skiing about 5km across the lake to a little stream, leaving the skis there and walking or running about 5km of dirt road upstream where I would have inflated my packraft and paddled down couple of kilometers of the little flooding stream back to my skis and skied back home. Unfortunately I was too late for this and actually I didn’t even have the time because of guide school related paperwork… (Paperwork be cursed! Wilderness Guides should be trained and work outdoors, not behind a desk!)

I published my little plan and the little trip report here because I hope that they’ll inspire people to go out and enjoy the spring! Especially in the Northern parts of Scandinavia the possibilities to combine different means of travel on the same day on the same area is still very much possible and I hope you’d take advantage of this and enjoy the sunny days ahead! Or did you already do it?

trip reports
← Back from the glacier! Done and to be done →

3 responses to “The last of the season”