A skiing trip back in time

Just a short post from a short skiing trip. A skiing trip back in time. And a lot of nostalgia. Well, nostalgia from a 26-year-old if such thing is possible.

I have learned that I have to write when I have the inspiration to do so, so here we go…

The weather on Saturday was awesome with clear blue skies, sun shine, no wind and warm temperature. Unfortunately I had to be indoors sitting in a meeting but at some point all meetings end and I managed to get out skiing with the Altai Hoks before sunset. I took a short drive to a field side, donned the skis and headed to a little swamp on the other side of the field. The sun was about to set but there was still plenty of light.

The days are already pretty long...

The swamp looked and felt a lot smaller than many years ago and the ditches were freshly re-dugged and forest had crown on the previously open areas. But the surroundings were still very familiar. 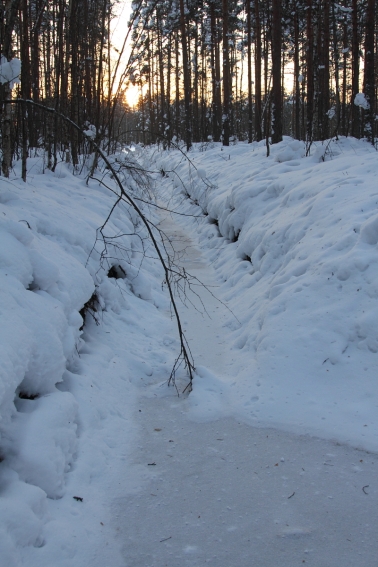 A super highway across the swamp.

On that very swamp I had gotten really lost for the first time in my life. I guess I was 6 or 7 back then. I was exploring the little swamp with the pockets of my cotton camouflage jacket full of lingonberries. I took a spin and walked full 180 degrees to a wrong direction, came to a road and started walking – again to the wrong direction. There were no cellphones that time so I think I walked some 4-5 km stopping to ask advice from a house on the way before my father came driving down the dirt road looking for me. At that point I actually knew which way the home was but it would’ve been nearly 10 kilometers of walking back home. A long walk for a little kid.

Since then I’ve spent numerous days skiing and walking on that little swamp and probably walked or skied along the field side for hundreds of times. Sometimes hunting with my father, sometimes looking for moose or deer and most often going for a trip with my friends.

Passing woodpecker's dining room on the way across the swamp.

Skiing across the swamp didn’t take too long while following the wide ditches and soon I came back to the field. A right hand turn and a few minutes of skiing would have taken me back to my car but instead I took a left hand turn. A little bit of skiing and soon I saw it: a little cabin on the field side next to a little stream. I skied across the field, crossed the little stream and I was soon at the cabin door. On the field there were some fresh fox baits for sit-and-wait hunt accompanied with a lot of fox tracks but the cabin was just like I remembered it.

In that very cabin I had spent my first night in the woods with friends (no parents involved). That was at the end of 1997 and I was 11½-year old. Since the first over-nighter me and few of my good friends spend probably dozens of nights in that little cabin. Biking, walking or skiing there to escape the little mundane responsibilities like school and homework, to observe the surrounding nature, to have good time and to grow.

I opened the door and stepped in. The furnishing had changed a little to serve better the sit-and-wait hunting but there was still the same rusty stove, the same holes in the corners, the same soot-blackened pot and kettle and the same guest book.

From my second over-nighter in the cabin.

My last entry was from year 2006 when I had given a ride to a friend (Whose leg had been operated and who was still walking with sticks!) who wanted to spend a night there. The last time I had spent a night there was in winter 2005. I thought I had stopped going there a few years before I went to army but apparently I hadn’t. I had spent several nights there every year between 1997 and 2005. The foundations of my outdoorsy lifestyle were built there: in and around that little cabin. Following the stream, walking the surrounding woods and skiing on the little swamp. The dozens of nights and daytrips gave experience and self-confidence that have led me here.

I owe a lot to that little cabin and to my old friends. I should pay the cabin another visit, this time with some food and a sleeping bag. 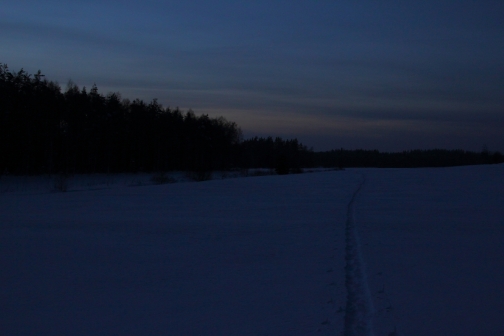 The familiar field side...

After little searching I found a pencil and wrote few lines to the guest book as there were no entries since 2006. When I left it was already getting dark and Vega and Deneb were twinkling on the deep blue sky. The same stars had been there for ages watching me coming and going and growing. I felt sad. Sad in a happy bittersweet way. It was an exceptionally good skiing trip.

Deneb and Vega. (Or Jupiter and Venus?)

9 responses to “A skiing trip back in time”