Should I buy a windshirt?

I’ve been thinking about the question in the title for a while now… Should I buy a windshirt?

The answer may seem (and be) obvious as almost all the people imaginable swear by windshirts:
– “For those of you who haven’t got yourself a ‘wind shirt’ yet, do yourself a favour and get one.”
– “Windshirts are one of the epitome of lightweight & ultralight backpackers.”
– “No other garment in my wardrobe is as adaptable or useful.”
– “I like wind shirts.   Had walks without them, and with.  Summing up my position is simple.  Get one.”
– “Given that windshirts are the most versatile of garments, having two isn’t a bad thing at all.”

Apparently they are the best single piece of clothing available for a lightweight or UL hiker. But, should I buy one? And if so, then why? And which one?

The reason why I’m thinking this is that I’ve never owned a proper windshirt and have managed years in the outdoors without one. I have a random cheapo windshirt that I modified a little (It’s now 85g, close-fitting, full zip and chest pocket) and have used occasionally. The problem with this shirt is that it’s not too breathable and windshirts should be breathable. At least more breathable than waterproof hard shells. And this one isn’t! What I do have is a pair of “wind pants” i.e. the Montane Featherlite pants and I do like them a lot (except that they are too short for my longish legs…) They are light, breathable, comfortable, quick drying and surprisingly durable. I’m a big fan of the Pertex fabrics.

Yours truly after walking 105km in 25 hours. Wearing the aforementioned Montane Featherlite pants and not-so-breathable windshirt.

Usually I’ve substituted the windshirt with other clothing that I’m carrying. In summer my outermost layer is either Rab Demand eVent jacket (waterproof, quite breathable), Powerstretch fleece (gives some protection from the wind, very breathable and occasionally too warm) or a Haglöfs Climatic button-up shirt (very versatile: bugproof, windproof, cool enough for hot weather and so on).  In winter I’m often very happy with my Goretex shell and if the weather is nice and warm I’m often happy skiing in my fleece, merino base layer or even going topless. In autumn I wear the eVent shell jacket or thin fleece as top layer. And this autumn I also did a trip wearing a Haglöfs softshell jacket made of the Flexable material. It performed flawlessly and I wore it every day, occasionally adding a waterproof jacket on top it. The times when I really miss a windshirt are quick and short trips and a bit sportier trips with high pace. And of course it would probably be nice in certain weather like in the strong cold wind in the fells in summer or during the days of little or moderate wind with warm sun in the open arctic.

Skiing in Svalbard on a warm day. Some are skiing in merino shirts, some in Powerstretch and some still wear Goretex jackets. Maybe a windshirt would be the best option?

But I feel that if I’d buy a windshirt it would just be adding weight and stuff into my backpack (or pulka) as I wouldn’t want to leave anything out in favor of it: The button-up shirt is simply great for summer use. I want to have a thin but warm fleece for cold weather and sitting in the camp (and actually two of these for colder winter trips). And for trips longer than a day or two, I want to have a waterproof shell jacket. But maybe the windshirt would add so much comfort that it would be worth the extra 100 or 200 grams? Or maybe I would learn to substitute something with the windshirt?

Hiking in the Haglöfs Climatic shirt in Lapland last summer. A windshirt might be a good option.

If I’d buy a windshirt it would have to work both in summer and in winter. For summer use it should be: windproof, bugproof, water-repellent, light, quick drying and reasonably durable. Long sleeves with thumb loops and a pocket or two would be nice but not obligatory. I don’t know if I’d need a hood for summer use as a hood in the shell jacket should be enough for me Long zipper might be nice but again not obligatory. The windshirt should protect me from cold wind and bugs and fend off occasional slight drizzle. For winter use the requirements differ a bit: again windproof, water-repellent and quick drying but also a bit warmer and a bit more durable. Long sleeves would become a necessity (and I wouldn’t mind having thumb loops), a full zip would probably be quite useful as would a pocket or two and a good hood would be very much-needed. In winter I would use the windshirt as a shell on trips in the woods and as a secondary shell and layering piece on trips on the open fells and arctic. From these bases I’ve shortlisted some options out there:

Or maybe I could replace my fleece with Rab Boreas Pull-on (reviewed by Dave here) to get more protection from wind but still have some insulation?

From winter perspective the list includes
– Montane Lite-Speed (with hood modified) but then turns towards heavier stuff:
– Rab Alpine Jacket being the lightest (the predecessor reviewed by Joe here)
– followed by Montane Dyno Jacket (few words by Petesy here)

Or maybe I could ditch my thin fleece and replace it with Rab Vapour-Rise Lite Tour (Vapour-Rise in general praised by Gary Rolfe here) that would provide both windproofness and warmth but still be breathable enough to layer under a shell in bad weather. 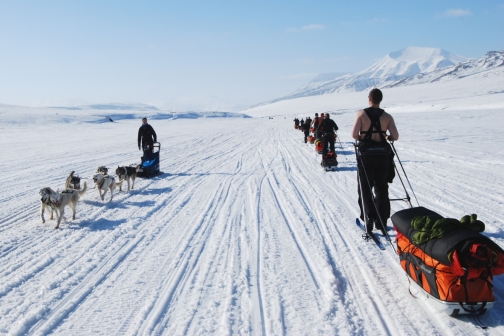 The last one in the line would be me going topless in Svalbard. Maybe a nice windshirt would have spared the poor bypassers from the sight? (Pic by Jouni Tanninen)

It seems that I might actually need two windshirts two fulfill the criteria. Or would one be enough and if so then which one? Or maybe I really don’t need a windshirt at all?

Help me out here and share your views and ideas! Also links to reviews about the stuff listed here would be nice.

27 responses to “Should I buy a windshirt?”