Spruce tip syrup – and dreams on living of the land

I spent most of the last Sunday wandering in the woods gathering the new soft annual shoots of spruce. These can be eaten as such, used to make tea or to make syrup. In this post I’ll explain my motives for making syrup instead of buying it and also share the recipe with you. If you live in Finland or on the same latitude you still got at least a week or so to enjoy the fresh spruce tips. Give them a try!

Dreams on living of the land

I haven’t written much about my background or motives in my blog but in addition to recreational outdoor sports I’m also interested in bushcrafty things and the basic skills of living of the land. I don’t see this as a hobby and I don’t feel like it needs a special name like “bushcraft” or similar. For me it’s about the skills and ways of living that our ancestors have utilized not-so-long-ago here in the forests of the North. Ways, that from my perspective seem quite sustainable, simple and satisfying. And for me it’s also about combining them to the best parts of modern way of life to seek out something satisfying.

As a kid I spent quite a lot of time with my grandmother gathering berries and mushrooms and at least equal amount of time fishing and hunting with my father. I think that the foundations of my close relationship with nature come all the way from my childhood experiences. There was a period in my life when I wasn’t too interested in these things (even though I still enjoyed outdoors in other ways). But for a some time now my interest in these lifestyle things has been growing again.

Even though living of the land in the Christopher McCandless style would be cool, I don’t think it would make a sustained way of living – at least not for me. Instead, I dream about changing part of the modern “work to earn money to buy food” cycle in the more traditional “work to get your own food” way of living. I believe that in this way I could keep up a decent standard of living with less work in the office and being able to spent more time in the nature. And the process of living of the land is also very satisfying: it’s a “hands on work” closely related to nature and also directly connected to your own well-being. And I happen to like it!

As I said, I spent Sunday mostly in the forest gathering spruce tips. The weather was great and even a typical forest of Southern Finland can be interesting if you slow down your pace and stop to wonder the little things along the way. For example while I was gathering the tips from one small spruce it sounded like it was raining. But clearly it wasn’t raining as the sun was shining, the skies were bright blue and I didn’t feel any drops hitting me. After some time I noticed huge amounts of ants skittering on the ground on top of dead dry leafs. The tiny ants made a sound similar to rain drops hitting leafs around you! And there I stood listening the little creatures making a sound reaching my ears a few meter away. If that isn’t wonderful then what is?

Maybe some day I can spend most of my days in the nature and wonder all the things little and small – and still make an even more satisfying living.

Spruce tips are the soft new annual shoots of spruce trees. Compared to the tips of the older branches they are lighter in color, softer and usually more dense. The spruce tips can be eaten as such, boiled, used to make syrup or tea. Apparently there is quite lot of vitamin C in them but I guess that the extended boiling of the syrup making process will destroy most or all of that. Apparently spruce tips are not good for people with kidney problems, so enjoy them at your own risk. The syrup is very good with ice cream or pancakes or similar, it can be used to season tea or sauces for game meat and with some good balsamic vinegar it would probably make a great salad dressing. Next spring I might try making syrup from birch sap and spruce tips so I wouldn’t need to add any (commercially produced and bought) sugar. That would be cool…

For spruce tip syrup you will need:

– fresh spruce tips
– water
– sugar
– and if you want, lemon or vanilla to spice it up

1) Start by gathering new soft spruce tips, preferably one to seven centimeters long.  You need about three times as much spruce tips in volume as you want to have syrup (so three liters of spruce tips makes about one liter of syrup). I gathered about six liters of tips and got a bit under two liters of syrup.

3) Place the spruce tips into a big cooking pot, add enough cold water to barely cover the tips (notice that they float, so don’t add too much water) and let them soak overnight. 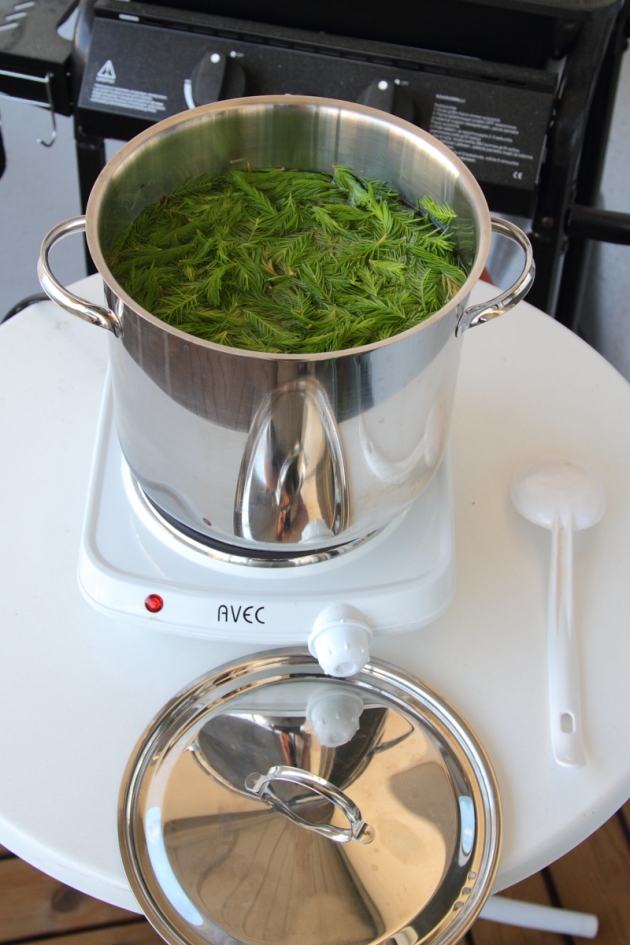 4) After soaking the tips, put the pot on a stove (or on cooking fire) and let it boil gently for about two hours. It’s good to use slightly over sized steel pot with thick bottom.

5) Filter the tips away and spare the liquid. I used a colander for first round of filtering and then removed the last small particles with colander lined with cotton veil. (Ultra light life style tip: the same veil makes also a good towel. Way better and cheaper than the microfiber ones sold in sports stores.) I guess you could eat the left-over spruce tip mush but I threw it away.

5) Add sugar to the filtered liquid. The right amount is about 0,5kg per one liter of liquid. If you would use less sugar and boiled it down for longer time, you could probably make smaller amount of syrup but with more intense taste.

6) Put the sugared liquid back on the stove (or fire) and let it boil down so it turns into thick syrup. Don’t use a lid as you are supposed to get rid of some of the water. There will probably be some greenish froth on top while cooking. Peel it away. The original recipe recommended cooking the syrup for two hours and that’s what I did. It seems to about as thick as maple syrup and I can still get the stuff out of bottle. More cooking will result to thicker syrup but if you boil it too much you will have later problems to get it out of the jars…

The syrup after about two hours of cooking.

7) Pour the hot syrup into clean and treated glass bottles (for thinner stuff) or glass jars (for thicker stuff). It is good idea to place the bottles and jars into hot oven to kill all the germs before pouring the syrup in them. I put my bottles in an oven with 150 Celsius for 30 minutes. Fill the vessels to the brim with hot syrup and close immediately. I kept the syrup on simmer while doing this: pouring boiling syrup into 150 Celsius glass bottles and sealing them immediately when the boiling stopped. This way there should be no change for bacteria to get into the bottles. A pair of leather gloves comes handy at this stage.

Heat treating the bottles in 150 Celsius oven before bottling the syrup.

Hot syrup still boiling in the heat-treated jar. I waited for the boiling to stop, filled the vessels to the brim and sealed immediately.

8 ) Preserve the bottles in cold place protected from sunlight. Because of high sugar content of the syrup and heat treating the syrup should last long – if you can resist consuming it immediately. Enjoy during the long and dark winter months!

My little treasure for the winter to come… Notice that the hot syrup has shrinked in volume while cooling creating a vacuum inside the vessels first filled to the brim.

Remember that gathering spruce tips is NOT EVERY MAN’S RIGHT in Finland and you need to have the land owners permission to gather them!

The spruce tips are out again! And it’s time to make some more of the good stuff for the next winter…

I thought it would be nice to share some info about the syrup I made a year ago: I didn’t use much of it as I spent a lot of time away from home (at the Wilderness Guide School, on trips and on the practical working period in the North) so most of the syrup spent the winter in a cellar. Unfortunately the bottles didn’t seal as well as I wished and even though the caps were air tight (still vacuum inside the bottles while opening) there was some mould growing inside and I ditched the contents. The little jars worked as assumed and the syrup was still fresh and usable. So, jars is what I recommend.

As I mentioned in the original post the syrup is great with iceream of pancakes. I also tried it with vinegar and it makes great salad dressing. And great martinis with gin and topped with some soda, it turn into a cooling long drink. 😉